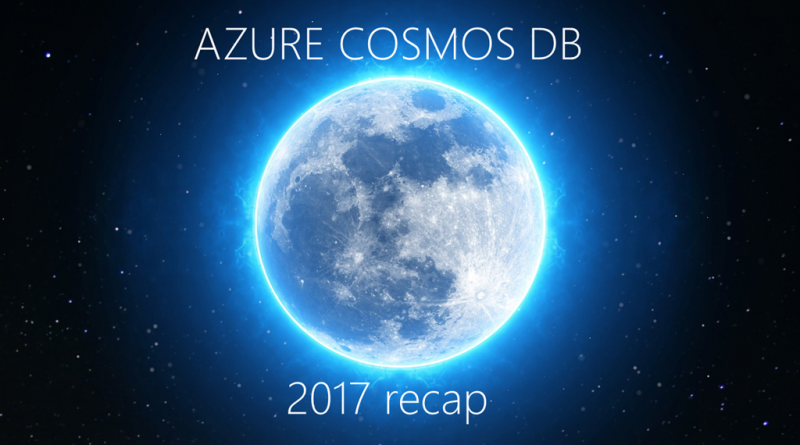 It was a pretty amazing year for Azure Cosmos DB, highlighted by the launch of the service, the preview and general availability of Graph, Table APIs, MongoDB API, native Spark connector and many other awesome capabilities. There were breakthroughs in making our SLAs truly industry-leading, adding native integration with Azure Functions and launching Try Cosmos DB for free to empower anyone to experience and play with our service without having an Azure account or having to specify a credit card. Below is a look back at 2017 and some of the memorable milestones.

The Launch of Azure Cosmos DB

In May, we were super excited to announce the general availability of Azure Cosmos DB – Microsoft’s globally distributed, massively scalable, multi-model database service. It is the first globally-distributed data service that lets you elastically scale throughput and store across any number of geographical regions while guaranteeing low latency, high availability and consistency. While also backed by the most comprehensive SLAs in the industry. It is the first cloud database to natively support a multitude of data models and popular query APIs. It is built on a novel database engine capable of ingesting sustained volumes of data and provides blazing fast queries. All this without having to deal with schema or index management. And it is the first cloud database to offer five well-defined consistency models so you can choose just the right one for your app. Read more about Azure Cosmos: The Industry’s first globally-distributed, multi-model database service and relive the launch by watching the #MSBuild Day 1 Keynote video.

A common design pattern in these applications is to use changes to the data to trigger additional actions. To help you build powerful applications on top of Azure Cosmos DB we built change feed support, which provides a sorted list of documents within a collection in the order in which they were modified. To address scalability while preserving simplicity of use, we introduced the Azure Cosmos DB Change Feed Processor Library. Read more to learn when and how you should use Change Feed Processor Library.

We are now entering the era of serverless. With serverless architecture, there is a whole new range of applications emerging, in particular serverless event-driven apps. When the event is triggered your application pops into action, does what it needs to do and disappears again. That’s why we start calling it “severless” because in essence, your server does not exist until it is needed. In September, we announced the availability of native integration between Azure Cosmos DB and Azure Functions. With this native integration, you can create database triggers, input bindings, and output bindings directly from your Azure Cosmos DB account. Using Azure Functions and Azure Cosmos DB, you can create and deploy event-driven serverless apps with low-latency access to rich data for a global user base. Watch this demo on Serverless Apps with Azure Cosmos DB & Azure Functions at Microsoft Ignite.

Transparency is an important virtue of any cloud service. Azure Cosmos DB is the only cloud service that offers 99.990% SLAs on read availability, throughput, consistency, and <10ms latency, and we transparently show you metrics on how we perform against this promise. This year, we have made a number of investments to help developers monitor and troubleshoot their Azure Cosmos DB workloads. In September, we announced several metrics we had added to the service, as well as integration of our metrics with popular Azure Monitor, OMS, and a preview of Diagnostics logs. Get insights into your Azure #CosmosDB: partition heatmaps, OMS, and more.

We continuously improve our stack and in November we were really excited to announce even stronger SLAs for Azure Cosmos DB – now databases spanning multiple regions will have 99.999 percent read availability. Learn more by reading Azure Cosmos DB SLA page.

We announced the public preview of support for Azure Cosmos DB in the Azure Storage Explorer (ASE). With this release Azure Cosmos DB databases can be explored and managed with the same consistent user experiences that make ASE a powerful developer tool for managing Azure storage. The extension allows you to manage Azure Cosmos DB entities, manipulate data, create and update stored procedures, triggers, as well as User Defined Functions. Azure Storage Explorer not only offers unified developer experiences for inserting, querying, and managing your Azure Cosmos DB data, but also provides an editor with syntax highlighting and suggestions for authoring your Cosmos DB stored procedures. With this extension you are now able to browse Cosmos DB resources across both SQL (DocumentDB) and MongoDB interfaces along-side existing experiences for Azure Blobs, tables, files, and queues in ASE.

Azure Cosmos DB is a foundational service in Azure powering mission-critical applications, services and customer workloads around the world. Azure Cosmos DB is now a part of the preview of Microsoft Azure in France, which is now open to all customers, partners and ISVs worldwide giving them the opportunity to deploy services and test workloads against Azure Cosmos DB in these latest Azure regions. Azure Cosmos DB in the new regions will offer the same enterprise-grade reliability and performance with the industry-leading comprehensive SLAs to support the mission-critical applications and workloads of businesses and organizations in France. Sign up for Azure France preview.

Most of the above mentioned happened thanks to you – our customers, MVps, developers, partners and organically, as we worked hard to add value to our customers and empower anyone to build globally-distributed applications with ease. It took us years to operationalize the capabilities we currently offer. We were fortunate to have Internet scale Microsoft applications to learn from which allowed us to identify, validate, and operationalize the five consistency models, the industry-leading comprehensive SLAs, the guaranteed single-digit millisecond latency for reads and writes and robust partition management for independent scaleout of storage and throughput. We have been constantly working on optimizing the propagation delays across various workloads by dynamic replication topologies, made our software stack across a variety of failure modes and interconnectivity issues for both within and across, various Azure regions. We have constantly optimized the core replication protocol (we are not done yet) to bring all of this to you, our customers. Azure Cosmos DB is the database of the future – it is what we believe is the next big thing in the world of massively scalable databases! It makes your data available close to where your users are, worldwide and makes building planet scale apps super-easy using the API and data model of your choice.

A new year is on the way and the possibilities are endless. We can’t wait to share what we have in store for you in 2018 and see what you will build with Azure Cosmos DB this upcoming year