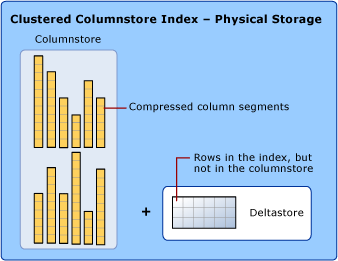 “After upgrading to the Gen2 of Azure SQL Data Warehouse, our data warehouse workload has seen an average of 4 times performance improvement. We have been working with Azure SQL Data Warehouse Compute Optimized Gen2 tier since its inception and the use of NVMe SSDs have shown the largest performance improvement we have seen to the service” said Rajeev Acharya, Senior Software Engineer at the Windows Data and Analytics (DnA) team for Microsoft.

Before we delve into details, I’d like to describe on how SQL Server implements industry leading columnar storage, which is the default storage type used in Azure SQL DW. Columnstore divides table rows into 1 million row units called rowgroups and compresses each column within the row group. A variety of compression techniques are used, such as dictionaries, bit-packing, and run-length encoding. When data is scanned, only required columns are read into memory. Compression and columnar oriented storage results in significant reduction of I/O requirements. In addition, in many cases SQL Server engine operates directly over compressed data, taking full advantage of vectorized CPU extensions such as AVX. The combination of both techniques often results in up to 10 times the improvement in query speeds over row-stores.

Using column stores does not require the applications to remove updates or deletes, those are tracked into delta store tables and once enough changes happen, the data is recompressed back into the column store representation. You can find a more detailed description of SQL Server column stores.

Azure SQL DW is comprised of multiple compute nodes, each running an instance of SQL Server engine and a Data Movement Service (DMS) which is responsible for data repartitioning operations. SQL DW decouples compute from storage – both can scale independently, and the data warehouse instance can be paused while keeping all the data resident in Azure storage. This gives our customer flexibility to build a cloud data warehouse solution, for their unique needs, and scale up and down easily, truly leveraging the elasticity of cloud computing.

SQL DW columnar cache is a built-in feature for Azure SQL DW Compute Optimized Gen2 tier, no additional set up or configuration is required. For example, we have optimized the cache to work well with occasional large queries which may access more data than local NVMe storage capacity available to Azure SQL DW instance. The columnar storage cache is also resilient to failures, so a failure of SQL DW node will not result in loss of performance for the cached data, and additional copies of cached data get created as needed.

Azure SQL DW Compute Optimized Gen2 tier blends fast local performance enabled by NVMe devices with elasticity only possible in cloud. The presence of adaptive caching continues to allow the data warehouse instance to be resized or paused to save our customer money. When an SQL DW instance is resumed after a pause, SQL DW populates cache again from Azure Storage as data is queried.

You can now learn more about: