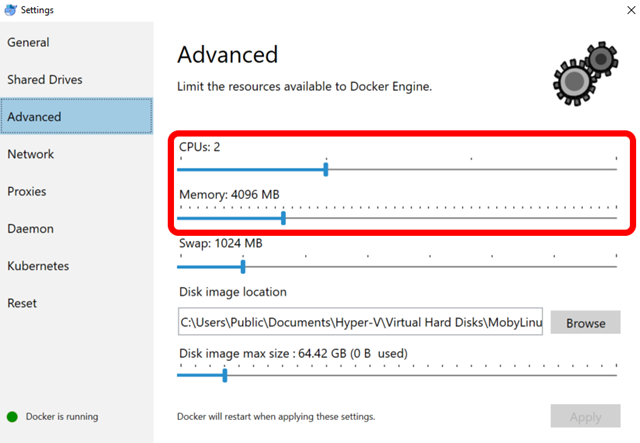 Last week we announced a preview of Docker support for Microsoft Azure Cognitive Services with an initial set of containers ranging from Computer Vision and Face, to Text Analytics. Here we will focus on trying things out, firing up a cognitive service container, and seeing what it can do. For more details on which containers are available and what they offer, read the blog post “Getting started with these Azure Cognitive Service Containers.”

You can run docker in many contexts, and for production environments you will definitely want to look at Azure Kubernetes Service (AKS) or Azure Service Fabric. In subsequent blogs we will dive into doing this in detail, but for now all we want to do is fire up a container on a local dev-box which works great for dev/test scenarios.

You can run Docker desktop on most dev-boxes, just download and follow the instructions. Once installed, make sure that Docker is configured to have at least 4G of RAM (one CPU is sufficient). In Docker for Windows it should look something like this:

The Text Analytics images are available directly from Docker Hub as follows:

For the text and Recognize Text images, you need to sign up for the preview to get access:

Here we are using the language detection image, but the other images work the same way. To download the image, run docker pull:

You can also run docker pull to check for updated images.

Now you have the image locally, but in order to run a container you need to get a valid API key and billing endpoints, then pass them as command line arguments. First, go to the Azure portal and open the Cognitive Services blade. If you don’t have a Cognitive Service that matches the container, in this case a Text Analytics service, then select add and create one. It should look something like this:

Once you have a Cognitive Service then get the endpoint and API key, you’ll need this to fire up the container:

The endpoint is strictly used for billing only, no customer data ever flows that way.

To fire up the container, you use the docker run command to pass the required docker options and image arguments:

If you need to configure an HTTP proxy for making outbound requests then you can do that using these two arguments:

In the console window you can see that the container is listening on http://localhost:5000 so let’s open your favorite browser and point it to that.

Now, select Service API Description or jump directly to http://localhost:5000/swagger. This will give you a detailed description of the API.

Select Try it out and then Execute, you can change the input value as you like.

The result will show up further down on the page and should look something like the following image:

You are now up and running! You can play around with the swagger UX and try out various scenarios. In our blogs to follow, we will be looking at additional aspects of consuming the API from an application as well as configuring, deploying, and monitoring containers. Have fun!

I’ve now pedalled over 6000km this year. One month ahead of my annual target 😅🚴‍♂️