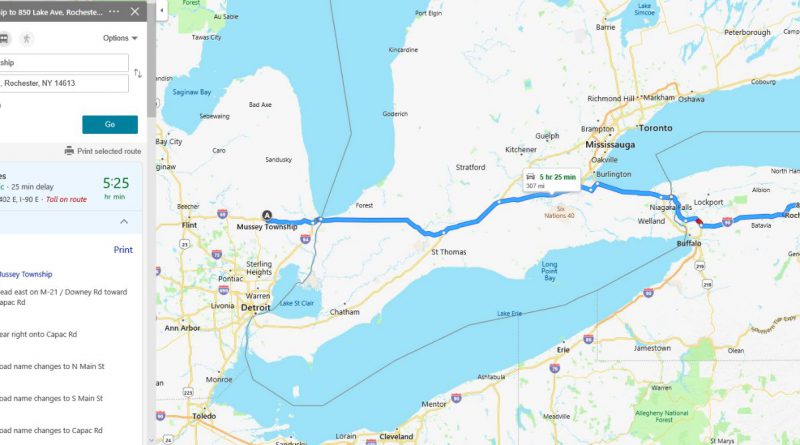 The Bing Maps Platform offers a full suite of premium routing and logistics APIs for your fleet management and logistics applications, and we are pleased to share with you some of our recent updates to these APIs.

There are a number of scenarios where users may want to be mindful of country borders when calculating a route. For example, when driving from "Mussey Township, MI" to "850 Lake Ave, Rochester, NY", the fastest route is entering Ontario, Canada at Blue Water Bridge, and then coming back to New York, United States, as shown in the bing.com/maps screenshot below:

However, some drivers and vehicles may need to keep their routes within the United States due to visa requirements or customs duties. Using the optional parameter avoid=borderCrossing, Bing Maps Calculate Route API can offer an alternate route, which may have a longer travel time and travel distance, but keeps the route within the United States without crossing country borders. See screenshot below:

In addition to avoid=borderCrossing for avoiding crossing country borders for auto and truck routes, Bing Maps now also supports customizable border crossing restrictions for the Truck Routing API. This optional borderRestriction parameter supports specifying regions or geographic areas where border crossing should be avoided, allowed or minimized. For example, some transport rules may allow trucks to route through some countries, however, strictly prohibit the trucks from entering some other countries. Also, there may be state or federal regulations around transporting certain goods, such as tobacco, vaccines, medicines or controlled substances across a country border or state lines.

The Bing Maps Truck Routing API can now handle these scenarios by simply setting a parameter in the API call. Here's an example scenario: A truck driver may need to drive from Ashville, TN to Jacksonville, FL, with a requirement to avoid driving through the state of Georgia. Here's how the borderRestriction parameter is used to accomplish this:

The black dashed line on the maps illustrates the route without the borderRestriction, which will go through the state of Georgia, while the blue line shows the route as the user has specified, with the state boundary restriction for Georgia (US-GA). See the Calculate a Route API and Calculate a Truck Route API documentation for more details on these features. 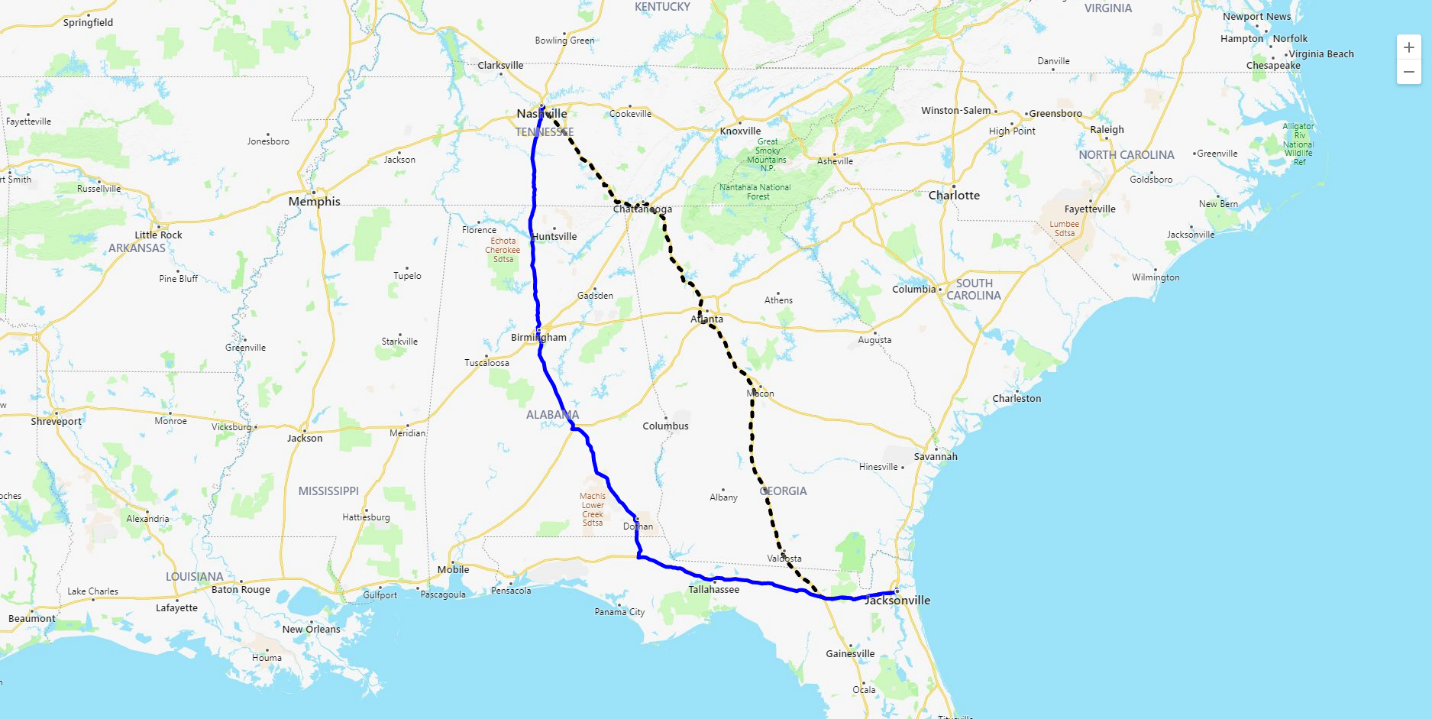 The Bing Maps Team has made several improvements to the Bing Maps Isochrone API. The API now returns more points, which results in smoother and more precise isochrone polygons. Also, with the latest performance improvements, larger isochrone requests return results faster than before. 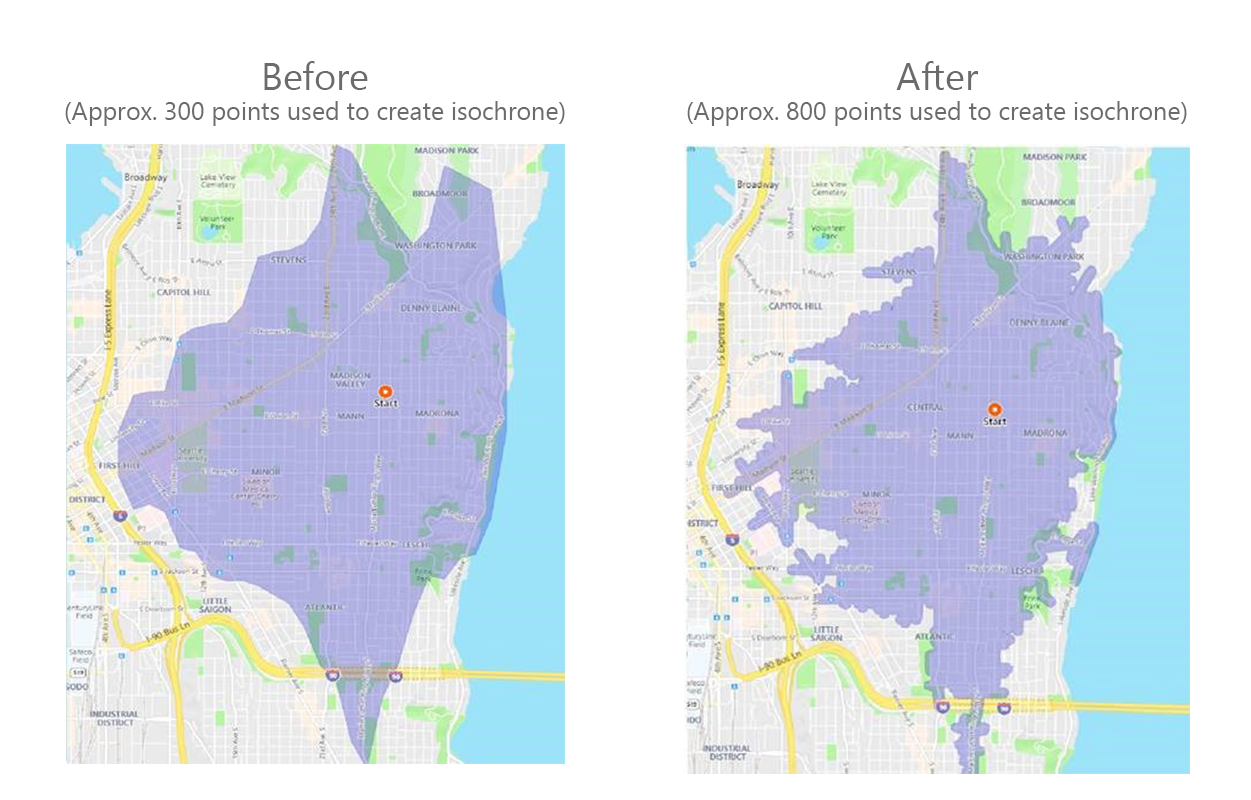 Also, the Isochrone API now supports "truck" mode. The example below shows a comparison between an auto isochrone and a truck isochrone with the same start point and travel time. As you can see, the truck isochrone polygon covers a smaller area on the map because of the lower speed limits based on vehicle attributes. 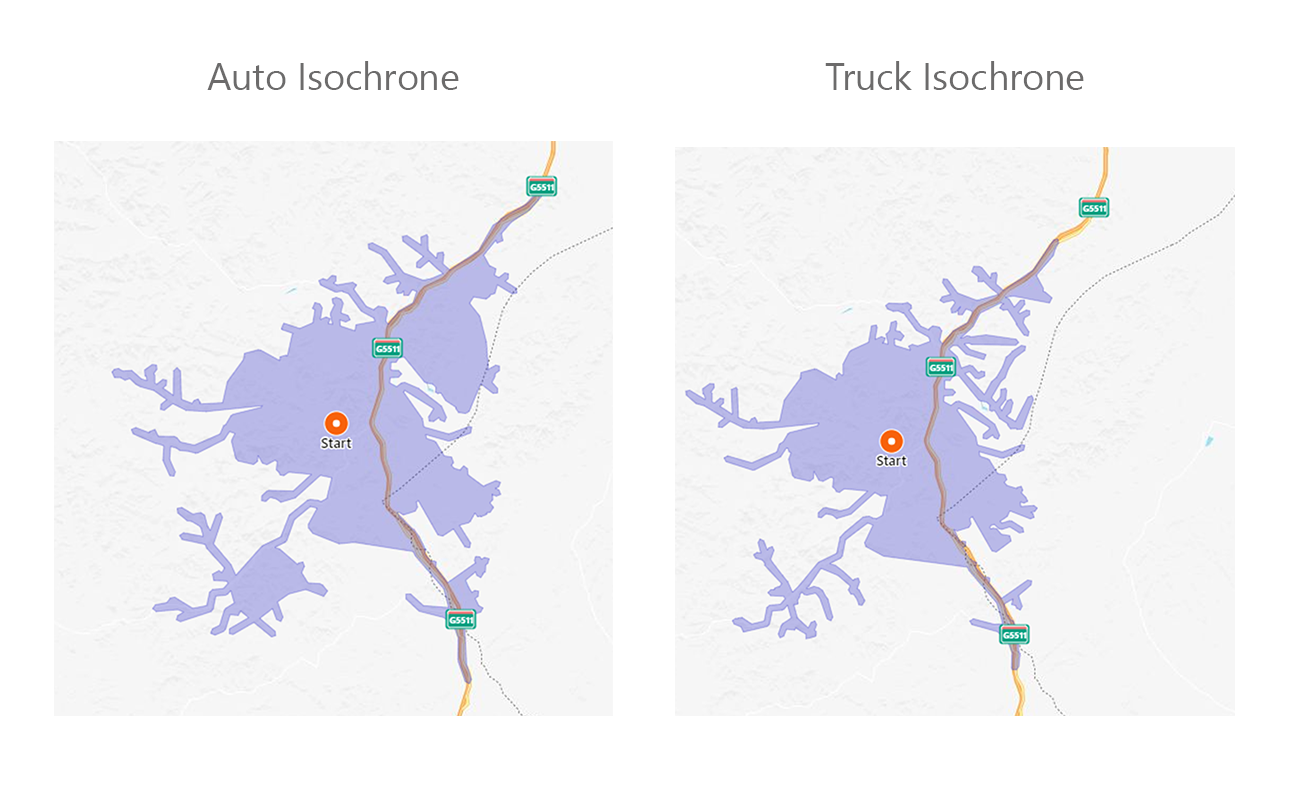 In the example below, the red line visualizes the interpolated route between the same input points as connected by the blue line, with speed limits for auto and trucks for the roads (i.e., in the speed limit pairs, the first speed is for auto, and the second speed is for trucks). For the first half of the road segment on I-90 (from west to east) as shown below, the auto and trucks have the same speed limit of 97 kmph, while for the second half of the road segment, the auto speed limit is 113 kmph and the truck speed limit is 97 kmph. 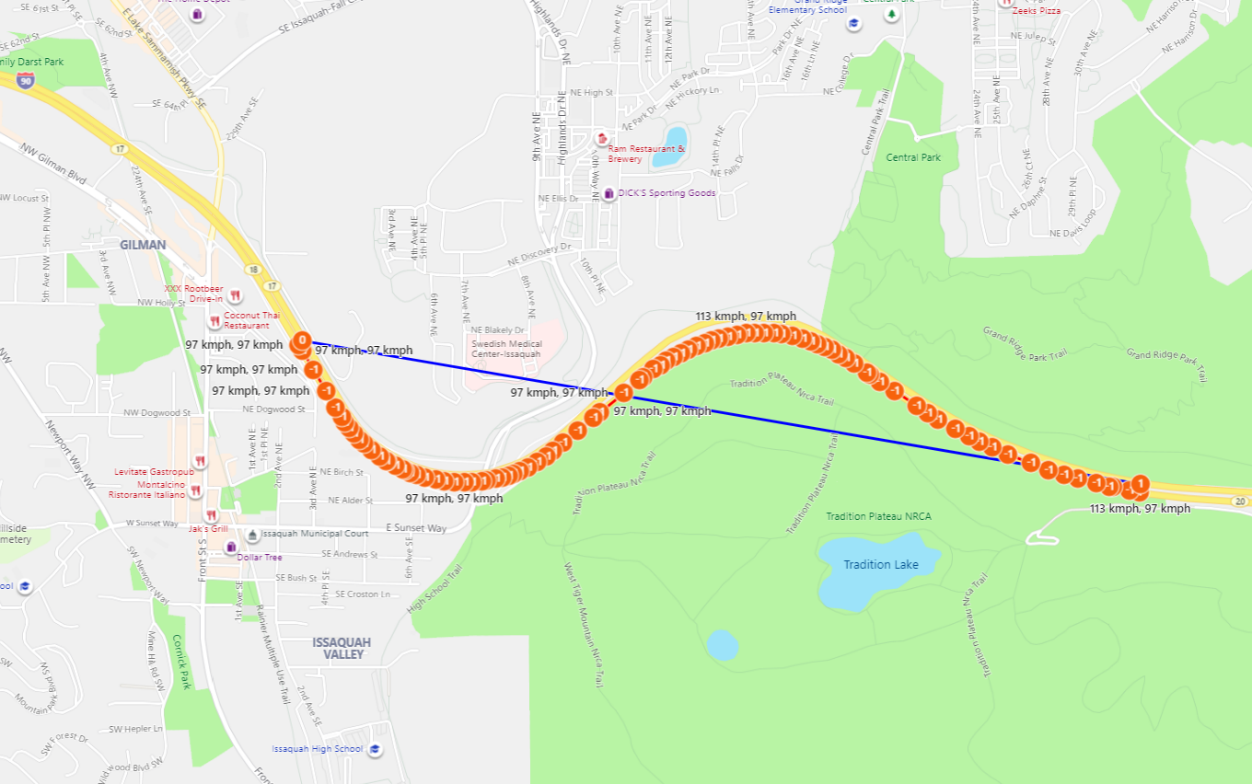 Some road segments have different truck speeds with respect to vehicle specs. For the road segment shown below, in the example on the left where no vehicle specs are defined for the Truck Routing API, the API returns speed limits for auto and those for an undefined truck, which happen to be the same for this road segment. In the example on the right, if the user defines the vehicle specs, (e.g., {"VehicleWeight":[8300]}), the API returns 113 kmph for auto and 96 kmph for trucks with weight of 8300 kg. For more details about truck attributes, please check the Calculate a Truck Route API documentation. 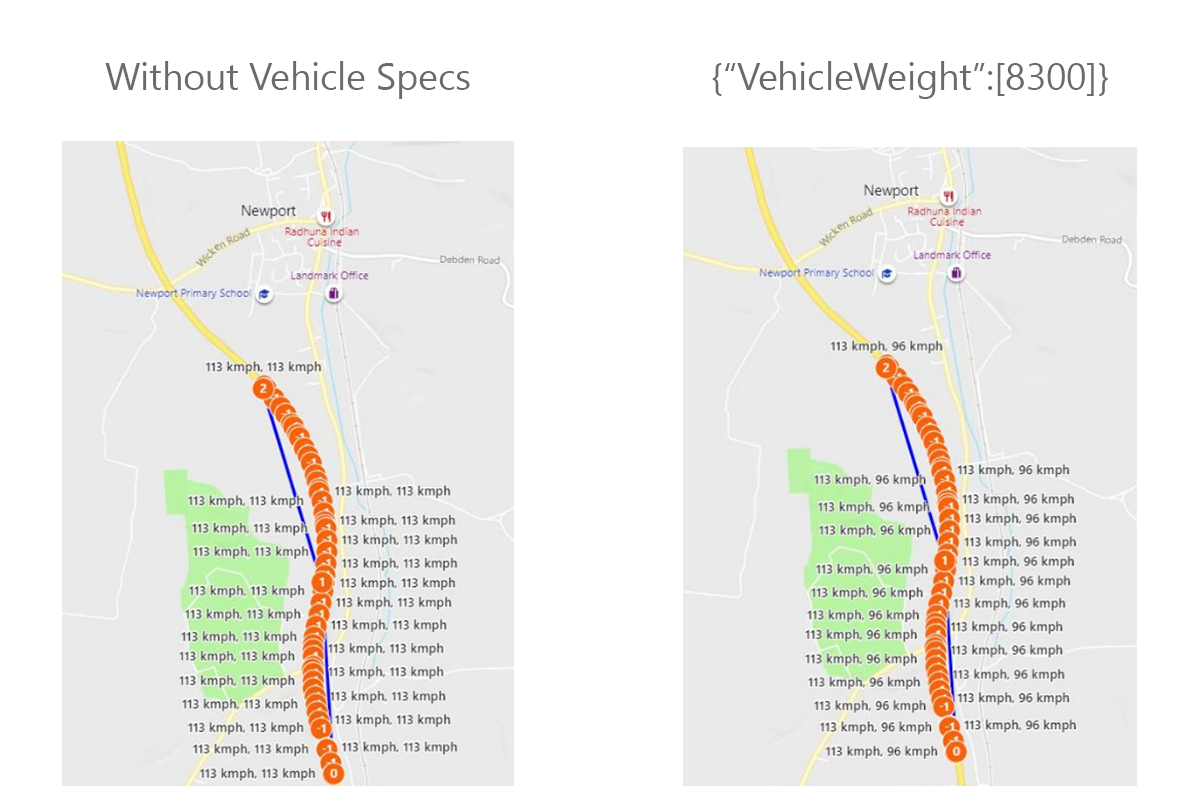 After the launch of the Bing Maps Multi-Itinerary Optimization API at Microsoft Ignite 2019, the Bing Maps Team has been busy listening to customer feedback. On that note, we're happy to announce that the Multi-Itinerary Optimization API now supports up to 20 agents (previously 10) and 300 locations (previously 100). We’ll continue to make improvements to the optimization algorithms to support even larger requests and to ensure accurate travel time estimates in the itineraries. 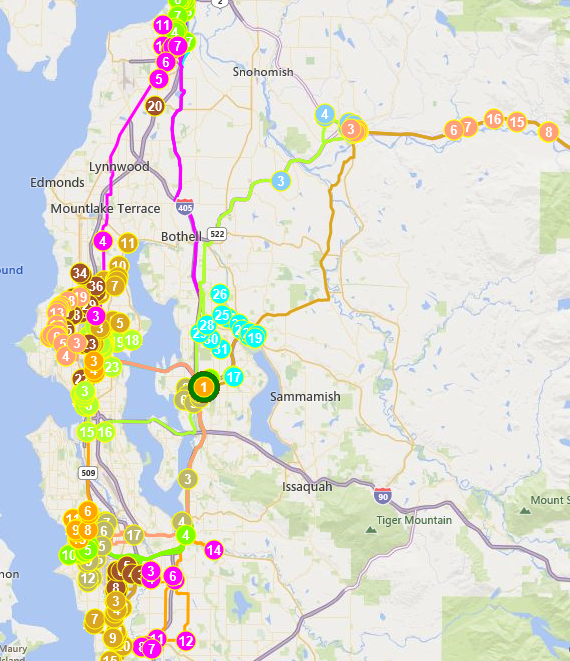 See the Multi-Itinerary Optimization API documentation for more details. Also, we encourage you to try the demo.

We hope the new features and enhancements within these Bing Maps Routing and Logistics APIs continue to empower you to create innovative solutions for your customers and users.

Ok let's put this out there (give back time), I want to help 5 folk who are just starting in IT or looking to get started.

20 minute phone call every 2 weeks for 8 weeks to help you get a first job or just help you through that first job.