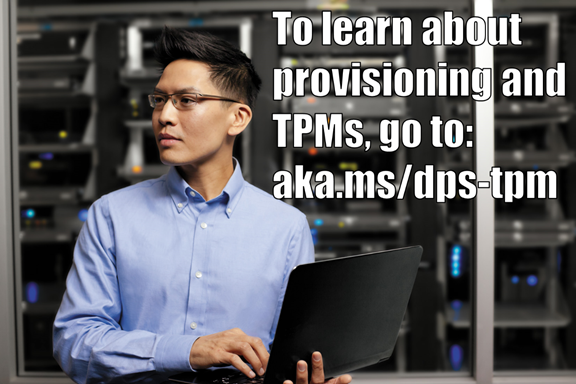 Behold the ID scope, one of the most nuanced concepts in the IoT Hub Device Provisioning Service. It is both reviled and lauded for its name-spacing characteristics in device provisioning. It throws a wrench in complex provisioning scenarios, but it’s also necessary for secure zero-touch device provisioning. This blog post is a culmination of several hours worth of conversations and design discussions in the engineering team, and it may take you several reads to fully understand. Understanding ID scopes is a journey, not a destination. If you don’t care about the details, just know that ID scopes are necessary to ensure identity uniqueness in the device supply chain. If you want to know why, read on.

Device uniqueness is made up of two pieces, a unique registration ID (not assumed private) and a key (assumed private). For shorthand, each device is represented within a single DPS as (X, Y) where X = registration ID and Y = key. This has been used for what feels like eons in computing, and the concept of a GUID is nothing new. It turns out that there are a couple of unique things about IoT scenarios that make this insufficient for uniquely setting a device identity. Device creation and digital enrollment can occur at separate times, and this requires some sort of scoping to prevent conflicts. We introduced the ID scope concept to scope identities to a particular tenant DPS.

Now, an illustrative example for why we have a scoping mechanism. Another reason has to do with the security technologies used to prove device identity. We support TPM attestation, and we provide a TPM emulator for developers who want to get started with a simulated device before they grab real hardware. The TPM emulator we publish to GitHub has the endorsement key hardcoded to a single value. It’s for development purposes only, so this shouldn’t be a big deal. This means that everyone following our tutorials will create a device with X = mydevice, Y = EK_github. This entry is unique to their DPS service, but not unique overall. When my tutorial device talks to the Device Provisioning Service and your tutorial device talks to the Device Provisioning Service, the service needs some way of telling the devices apart, hence the ID scope.

If we did require a unique (X, Y), a problem would arise when devices are created en masse, sit on a shelf for a year, and then are finally registered in the provisioning service. The (X, Y) of those devices might have already been registered in that period of time, especially if they are relatively common. Now these devices that have been sitting in storage are getting enrolled to a provisioning service, and the following happens:

Unfortunately, this is super common in supply chains. Supply chains are important, so this is out.

Another example of a temporal delay between picking an ID and registering the ID is picking an email address (or a domain name), and password before actually signing up for that email address. The only difference is that IoT devices are incapable of picking a new identity, unlike humans who can just choose a new email address.

We could require OEMs to take pains to ensure unique (X, Y) identities, but that's pushing a significant security burden onto customers who would much rather be secure by default. We want to make it as easy as possible for our customers to be secure, which means not giving our customers enough rope to hang themselves. So we need to have a Z.

Devices must know their (X, Y, Z) in order to present it to the Device Provisioning Service and be assigned to a hub. Devices are created with firmware including (X, Y, Z). There's no way for the device to discover its Z value either, because we've already determined that X and Y are not necessarily globally unique and we can’t do a unique lookup for a Z value. The device needs to be created with all three values set at the same time.

There's also the scenario when the initial programmer of the device doesn't do cloud attach. I'll get to that in a moment.

Of course, bad actors could technically guess my device's (X, Y, Z) and get their malicious devices connected to my IoT hub, but this isn't a new threat. There's only so much we can do to protect our customers. If I name all my devices in the format "toasterN" with a symmetric key of "password" and a bad actor discovers my ID scope, there's nothing I can do to stop them from hijacking my device naming scheme. At least they can only hijack identities for which there are enrollment records, which mitigates the risk somewhat. That being said, I can open a bank account with a password of "password123!" and lose my life savings much more easily. There's always going to be a threat, it just depends on how much effort you're willing to put into your own security.

We should all be on the same page, each device needs a unique (X, Y, Z) and only trusted actors can create enrollment records for a given Z. The Device Provisioning Service obfuscates the Z so it's hard to guess what it’ll be for a given tenant name.

It turns out that this works beautifully if the same entity who programs the initial firmware onto the device is also responsible for the cloud-attach IoT solution. This is the scenario that I call the "all-in-one OEM". This OEM produces specialty devices or single-purpose devices that have a ready-made IoT solution to use with them. The OEM's customer buys the devices and probably a subscription to the service attached to them, but they don't build their own solution. Examples of this are consumer smart devices like coffee makers (OEM wants to geo-shard their solution), specialty manufacturing equipment, and other large machinery that's often leased.

This document focuses on the need for ID scope and is not a dive into the scenarios. If there's interest, I'll do a separate blog post on provisioning scenarios. So for the time being I'm going to assume that somehow there's a Z value that gets on the device so the device has a full identity. Now there's a device (X, Y, Z) with a corresponding enrollment in DPS_Z and we’re sure it is unique and cannot be spoofed.

We really do need ID scopes

Here's what we learned:

To sum things up with a limerick:

We really did try to say nope
To device identity scopes
But security
Is not always easy
So now we all just have to cope.