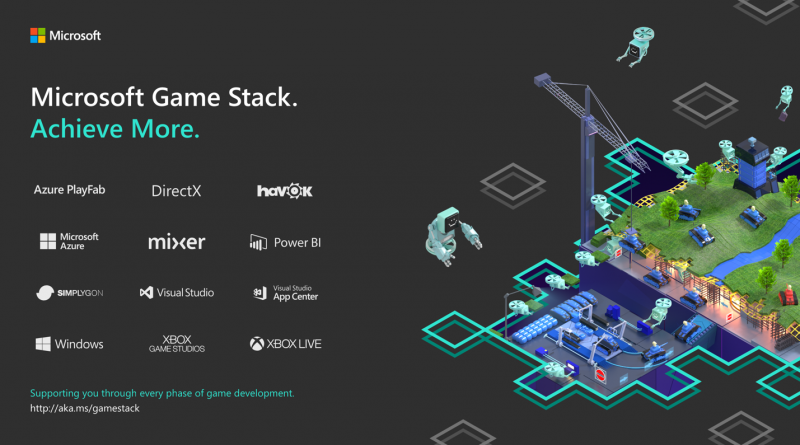 Microsoft is built on the belief of empowering people and organizations to achieve more – it is the DNA of our company. Today we are announcing a new initiative, Microsoft Game Stack, in which we commit to bringing together Microsoft tools and services that will empower game developers like yourself, whether you’re an indie developer just starting out or a AAA studio, to achieve more.

This is the start of a new journey, and today we are only taking the first steps. We believe Microsoft is uniquely suited to deliver on that commitment. Our company has a long legacy in games – and in building developer-focused platforms.

There are 2 billion gamers in the world today, playing a broad range of games, on a broad range of devices. There is as much focus on video streaming, watching, and sharing within a community as there is on playing or competing. As game creators, you strive every day to continuously engage your players, to spark their imaginations, and inspire them, regardless of where they are, or what device they’re using. Today, we’re introducing Microsoft Game Stack, to help you do exactly that.

What exactly is Microsoft Game Stack?

Game Stack brings together all of our game-development platforms, tools, and services—such as Azure, PlayFab, DirectX, Visual Studio, Xbox Live, App Center, and Havok—into a robust ecosystem that any game developer can use. The goal of Game Stack is to help you easily discover the tools and services you need to create and operate your game.

The cloud plays a critical role in Game Stack, and Azure fills this vital need. Azure provides the building blocks like compute and storage, as well as cloud-native services from machine learning and AI, to push notifications and mixed reality spatial anchors. Azure is already available in 54 regions globally, including China, and continues to invest in building highly secure and sustainable cloud infrastructure and additional services for game developers. Azure’s global scale is what will give Project xCloud streaming technology the scale to deliver a great gaming experience for players worldwide, regardless of their device and location.

While Azure is part of Game Stack, it’s important to call out that Game Stack is cloud, network, and device agnostic. And we’re not stopping here.

The next piece of Game Stack is PlayFab, a complete backend service for building and operating live games. A year ago, we welcomed PlayFab into Microsoft through an acquisition. Today we’re excited to announce we are bringing PlayFab into the Azure family. Together, Azure and PlayFab are a powerful combination: Azure brings reliability, global scale, and enterprise-level security; PlayFab provides Game Stack with managed game-development services, real-time analytics, and LiveOps capabilities. Last fall, we saw what these two platforms can do together with PlayFab Multiplayer Servers, which allows you to safely launch and scale up multiplayer games by dynamically hosting your servers with Azure cloud compute.

To quote PlayFab’s co-founder James Gwertzman, “Modern game creators are less like movie directors, and more like cruise directors. Long-term success requires engaging players in a continuous cycle of creation, experimentation, and operation. It’s no longer possible to just ship your game and move on.” This is why a year ago, we welcomed PlayFab into Microsoft through an acquisition. PlayFab supports all major devices, from iOS and Android, to PC and Web, to Xbox, Sony PlayStation, and Nintendo Switch; and all major game engines, including Unity and Unreal. PlayFab will also continue to support all major clouds going forward.

In private preview today (contact us to join the preview):

Another major component of Game Stack is Xbox Live. Over the past 16 years, Xbox Live has become one of the most vibrant and engaged gaming communities in the world. It is also a safe and inclusive network that has broken down boundaries in how gamers connect across devices.

Today, we’re excited for Xbox Live to become part of Microsoft Game Stack, providing identity and community services. Under Game Stack, Xbox Live will expand its cross-platform capabilities, as we introduce a new SDK that brings this community to iOS and Android devices.

Mobile developers will now be able to reach some of the most highly engaged and passionate gamers on the planet with Xbox Live. These are just a few of the benefits for mobile developers:

Other components of Game Stack include Visual Studio, Mixer, DirectX, Azure App Center, Visual Studio, Visual Studio Code, and Havok. In the coming months, as we work to improve and grow Game Stack, you’ll see deeper connections between these services as we unify them to work more seamlessly together.

As an example of how this integration is already underway, today we’re bringing together PlayFab and these Game Stack components:

As we expand our focus to the cloud, the nature of the platform may be changing, but our commitment to empower game developers like yourself is unwavering, and we’re looking forward to the journey ahead with Microsoft Game Stack. Our teams are inspired and excited by the possibilities as we start to pull together all these great services and technologies. Please be sure to share your feedback with us as we go, so we can help you achieve more. If you’re at GDC, stop by the Microsoft booth in the South Hall of the Moscone Center to try out many of the new services, and to learn more about the exciting opportunities ahead.